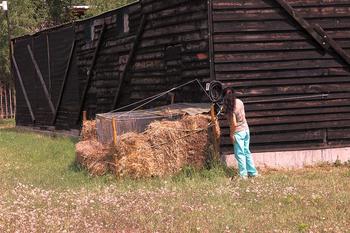 Four Montagu's harriers, reared in the specialized adaptation aviary in the Green Balkans' Wildlife rehabilitation and breeding center, were released in the wild!

12.08.2019
Its years since we've been using adaptation aviaries (hacks) to rear the Montagu's harriers rescued from the farming machines and release them from the Green Balkans' Wildlife rehabilitation and breeding center.

It is installed in the ground and imitates the natural habitat of the species - the crop fields with low vegetation.

The four chicks, reared and released in the Center, were rescued thanks to the attentive field workers.

The release was realised by the most uninvasive method - careful opening of the top of the aviary. Thus the birds remain undisturbed and have time to accomodate and fly out whenever they feel it.