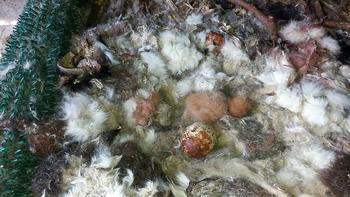 For the first time - an Egyptian Vulture chick was hatched in the aviaries of the Wildlife Rehabilitation and Breeding Centre!

30.05.2018
The young bird is an offspring of a pair from the Centre, which for a second consecutive year was trying to breed. On 29 May the chick was hatched, after our team noticed a hole on one of the two eggs in the birds' nest the previous day.

After consulting Антон Вайдал from the Prague Zoo, who is in charge of the Egyptian Vultures in the EAZA system, our team visited the nest on the day after the hatching. The young one was weighted, examined and fed, just in case.

A day after that, the team of the Wildlife Rehabilitation and Breeding Centre checked on the chick again and was determined it is in good health and fed by the parents. We took the second egg and just in case are keeping it in an incubator, where it will be monitored. We are hoping it will hatch, and in that case, it'll be returned to the parents.

All these activities in Green Balkans' Wildlife Rehabilitation and Breeding Centre are part of the ' Egyptian Vulture NEW Life" LIFE16 NAT/BG/000874 project, in which the organisation is partnering.