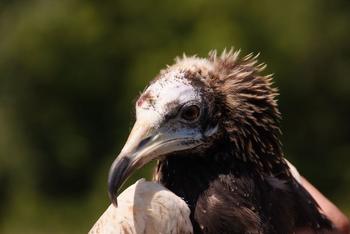 15.05.2018
On May 14, the team of the Bulgarian Society for the Protection of Birds and the Green Balkans tagged four young Egyptian vultures with satellite transmitters in Eastern Rhodopes. For nearly two months, birds are preparing for wildlife in a special adaptation aviary. The vultures were examined and dewormed and will be released after two days. Through the satellite transmitters, the experts will track their behavior in nature and their adaptation.


The four birds were granted to the “Egyptian vulture New LIFE” project from the zoos in Schonnbrunn, Prague and Jerez. This is a pilot experience in Bulgaria for releasing into the wild of captive-bred Egyptian vultures by the delayed release method (the vultures are one year old). Similar method has been successfully applied for years in Israel. This approach relies on the assumption that the birds have enough time to gain living experience in finding food and to enter into good fitness before taking on the challenging migration to the South (most of the wild young Egyptian vultures die during their first migration to Africa).


Tagging with satellite transmitters representatives of the only distant migrant among vultures in Europe is also devoted to the World Migratory Bird Day. “Unifying our Voices for Bird Conservation” is the theme of WMBD 2018, which was celebrated in over 60 countries around the world on 12 May 2018. This year, the campaign have a new global dimension, bringing together the world’s main migration corridors, also called flyways, for celebrations all across the world – and for the first time, with two peak campaign days in the year - on the second Saturdays of both May and October.


For migratory birds like the globally threatened Egyptian vultures, political boundaries do not exist. The only effective way to save this charismatic species is through multi-national and multi-institutional collaboration. The LIFE project “Egyptian Vulture New LIFE” LIFE16 NAT/BG/000874 was created for this purpose - it brings together institutions and organizations from 14 countries spanning the Balkans, Middle East and Africa. The four young Egyptian Vultures have been donated to the project with the assistance of Anton Vaidl - coordinator of the European Endangered Species Programme (EEP) of the European Association of Zoos and Aquaria (EAZA), and with the assistance of VCF.


World Migratory Bird Day is celebrated each year to highlight the need for the conservation of migratory birds and their habitats. More than 300 events in more than 60 countries to mark World Migratory Bird Day 2018 will include bird festivals, education programmes, media events, bird watching trips, presentations, film screenings and a benefit concert to raise funds for international nature conservation. The Convention on Migratory Species (CMS) and the African-Eurasian Migratory Waterbird Agreement (AEWA) — two intergovernmental wildlife treaties administered by UN Environment — organize the campaign in cooperation with Environment for the Americas (EFTA).