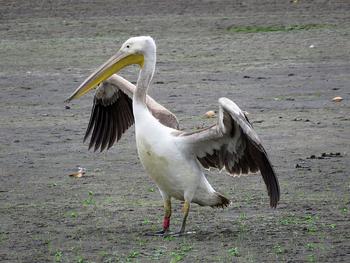 Flying free and with new friends

09.11.2018
Yesterday a White pelican, patient of the Wildlife rehabilitation and Green Balkans, was released at Rozov kladenets dam.


One of the rescuers of the bird was present at the release.

The pelican was found in the suburbs of Radnevo by signal of local citizens. Green Balkans’ volunteers Nikolaj Kolev and Georgi Dulev arrived onsite. Thanks to them the bird was immediately transported and accomocated to the Wildlife rehabilitation and breeding center.

After the examination the veterinarians concluded that the pelican was exhausted and with parasites. The treatment lasted for almost a month and the bird was generously fed with fish!
A few minutes after the release the pelican decided to walk around the region from above and flied in the sky.

The bird was joined by a young Dalmatian pelican and may be a new feathered friendship has just started!


Thanks to our friends from Radnevo for their support and fare wind t to the pelican!