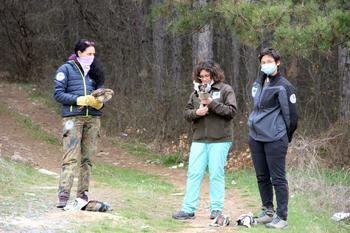 These are our usual seasonal patients. After being admitted and treated at the Rescue Centre's clinic, the birds were moved to the aviary to strengthen their wings. The birds had different injuries, two of them with more serious wing injuries, and the rest were exhausted after the winter.

After the healing of the wounds and the nourishing, the Common Buzzards were ready for release. We ringed them with ornithological rings of BAS for future tracking.

Fortunately, all of them flew off and took their new and brighter paths!