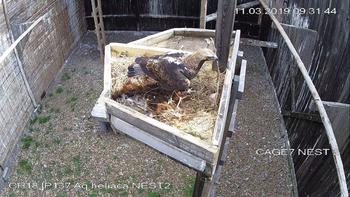 13.03.2019
The breeding season of the large raptors is in its peak and the Imperial eagles started copulating.

The team of the Rescue center has already captured the first copulations of the only captive bred pair of the species in Bulgaria. Unfortunately, they have never had clutches, but they have good relation and courtship behavior. The last few years the female bird has laid two infertile eggs, which both birds have been carefully incubating, but they never happened to be fertile.

The Imperial eagle has been classified as critically endangered in the Bulgarian Red Data Book. The team of Green Balkans has been working for its conservation for many years and it is a real dream for us to succeed in reproducing the pair in the rescue center, to contribute the survival of the species.

Imperial Eagle
In the past, the Imperial Eagle was one of the most common birds of prey. Today, the population of the species in the country is estimated at only 25-30 pairs, concentrated in the Sakar Mountains and the Derventski heights. Critically endangered, the species and its habitats are protected by the Natura 2000 ecological network.


The information activities of the Green Balkans’ Wildlife rehabilitation and breeding pair regarding the Imperial eagle are implemented within project: „NATURA 2000 in Bulgaria – NEW HORIZONS“ - LIFE17 GIE/BG/000371