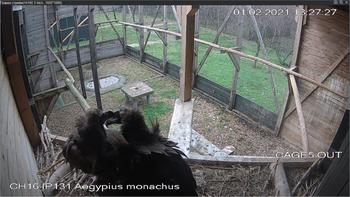 01.02.2021
After spending more than one month in nest building and showing excellent courtship behavior, the Black Vultures at the Green Balkans Wildlife Rescue Center have started their first breeding attempts.

First copulations for this breeding season have been observed since last few days, which is quite early compared to the last year. This tendency (to earlier copulations and earlier egg-laying) is also observed with other nesting vulture species. The Black Vultures are showing breeding behavior for the second year in a row. Last year they laid two eggs, unfortunately, both proved infertile.

The Black Vultures pair is still on the stage of breeding attempts, but considering their excellent mating behavior from the very beginning, we hope that success is only a question of time.

The restoration of Black Vultures as а nesting species in Bulgaria is part of the "VULTURES BACK to LIFE" project LIFE14 NAT/BG/649. Their successful breeding in capture, as well as in the wild, is one of the most important steps in achieving this goal.