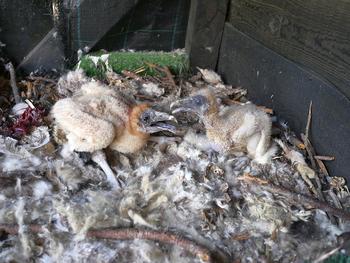 29.06.2018
"Fostering" has been proved as one of the successful methods for restocking of birds of prey, including vultures. Тhe method represents placement of captive-bred chicks in wild nests with foster parents. Successful application of the method depends on many critical points to be considered, such as the age of both wild and fostered chicks, detailed before- and after-intervention monitoring of the nests targeted for fostering, including investigation of bird’s behavior , and readiness to react quickly in the presence of a problem. For the Egyptian vulture, this method is used in the captive  breeding programs, but its application in the wild is yet poorly studied.

The last week a team of the Bulgarian Society for the Protection of Birds and Green Balkans set up an Egyptian vulture baby at the age of two weeks and hatched in the Prague Zoo in a nest of wild Egyptian vultures in the Eastern Rhodopes, Bulgaria. The aim was the vulture to be reared in wild conditions and better prepared for life in nature. The foster parents already had one chick, a few days younger than the fostered one. Such age difference is absolutely normal for hatchlings from the same brood.

Soon after the placement of the young bird, the team noticed unexpected and unusual for the Egyptian vulture aggressive behavior of the fostered chick towards the wild baby. Despite the visit of the male bird and his attempt to feed the two babies, the aggressive behavior of the introduced vulture did not stop. This required urgent intervention and transfer of the captive-bred vulture to the Wildlife Rescue Center of Green Balkans in Stara Zagora.

In the Center the chick was placed in the nest of captive Egyptian vulture pair, which for the first time this year hatched its own baby. But unfortunately again, the fostered chick showed aggression. We assume the cause of this atypical aggression is mostly related to the long time that the bird has spent for transportation, and to the individual characteristics of the young bird, rather than to competition for food between the two chicks in the nest. The swift intervention of the Rescue Center team with removal, feeding and re-return to the nest of the vulture gave a result, and the next day peace and tranquility came in the vulture’s family. Thanks to the video cameras in the nest in the days that followed, Green Balkans' team assured everything was OK, the fostered chick was well accepted and the two baby vultures enjoyed the warm care of their parents.

The BSPB team monitored the condition of the wild baby vulture from the nest in the Eastern Rhodopes and fortunately found it was stable without any grounds for concern. Once grown up enough in the Rescue Center, the fostered vulture from the Prague zoo will be tried again for release in the wild. However, based on the circumstances and experts opinion, this could take place by another method - hacking - placing young birds in an adaptation aviary (hack) in a rock nesting niche that is already ready and awaits its inhabitants.

Early in this spring within the LIFE project “Egyptian vulture new LIFE” another method has been tested - releasing into the wild of captive-bred Egyptian vultures by the delayed release method. After a few months' stay at the Green Balkans Wildlife Rescue Center, four one year old Egyptian vultures hatched in the Zoos in Prague and Jerez were placed in a special adaptation aviary in Eastern Rhodops. There for nearly two months they were preparing for wildlife. Before the release, each of the vultures was tagged with a satellite transmitter to track their behavior in nature and their adaptation. The aim of all these methods is to find the best approach for the purposes of a future restocking program for the Balkan population.

The activity is being carried out by BSPB and Green Balkans under the LIFE project "Egyptian Vulture New LIFE" LIFE16 NAT/BG/000874, which brings together institutions and organizations from 14 countries spanning the Balkans, Middle East and Africa. The baby vulture has been donated to the project with the assistance of Anton Vaidl - coordinator of the European Endangered Species Programmes (EEP) of the European Association of Zoos and Aquaria (EAZA), and with the assistance of VCF.