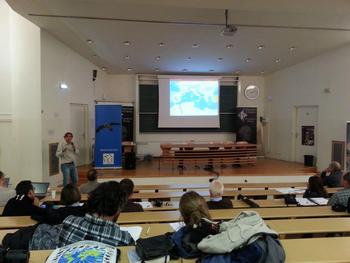 25.11.2015
Three employees and volunteers of Green Balkans had the pleasure to take part in the annual Bearded Vulture Meeting, which took place between 21-24.11.2015 in Corte, Corsica.

The meeting gathered over 80 officials, experts, researchers and scientists from more than 10 countries from Europe and Africa. The event was organized by the Vulture Conservation Foundation (VCF), which a partner of Green Balkans in our long-term programmes for restoring vultures in Bulgaria. The Parc Naturel Regional de Corse hosted the event.
The meeting reviewed all the reintroduction projects coordinated by the VCF that aim to restore the bearded vulture in Europe, from the Alps (34 pairs in 2015, a new record), to Grands Causses (where we will invest a lot in the years to come to facilitate a bridge population between the Alps and the Pyrenees), and Andalucía (first breeding in the wild this year, after extinction in the 1980s!), but we could also hear about the situation of bearded vultures in south Africa, hear the best practice from some great conservation projects happening, and will focus focused on the Corsican bearded vulture population.

The experts discussed the very concerning situation in Corsica, where only six territorial pairs of Bearded Vultures have remained, while the genetic studies reveal a very depleted gene pool. The organizations consider strengthening the population, releasing young Bearded Vultures from the captive breeding programme and preserving the genetic pool collecting some eggs. After the extremely interesting presentations, the experts managed to visit the release site, as well as observe one of the last remained territorial pairs of vultures in Corsica.

The new joint project of Green Balkans, VCF and FWFF Bright Future for Black Vulture LIFE14 NAT/BG/649 Project was also presented at the meeting. The project comprises actions for studying and prevention of lead poisoning in Bulgaria. This threat was identified as among the most signficiant threats for Bearded Vultures as well as other species. Similar actions will be undertaken by a French and a Spanish project, we will be more than happy to cooperate with.

The Wildlife Rescue Centre at Green Balkans - Stara Zagora is a part of the network of specialized centres and zoos, which maintain Bearded Vultures in captivity. Since 1978 the network has managed to “produce” a total of 461 young Bearded Vultures, used to restore the population of the species in the Alps and recently in Andalucía. We are excited to follow the first shy attempts of our own pair, hoping to also contribute to this incredible success. Our hopes are that after the successful termination of the on-going reintroduction efforts in the Alps, the Corridor Project and Corsica, the Balkans will be the next place for the Bearded Vultures to return.