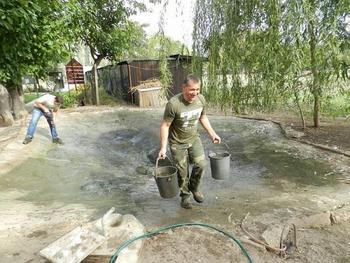 Darren is a "new Bulgarian." He was previously a citizen of England and now of Bulgaria. Darren and his wife Nikki contacted us years ago for the first time, saving a wounded owl they had found near their home. Since then Darren has become one of the most active volunteers of the Rescue Center. Dedicated and responsible and not afraid of hard work he has taken a worthy place in our team.

As part of the project "Reintroduction of the Saker Falcon in Bulgaria" he is responsible for the breeding pairs of Saker Falcons in the center, and it largely depends on him as to whether they will fly again in the sky over Bulgaria.

His beautiful photographs are eye candy for all adopters whose diplomas they adorn. Keen on football in Bulgaria Darren has discovered his new love - birds and photography. In this respect the Wildlife Rescue Center enables him to combine his two new passions and to find new friends and allies in the team at Green Balkans .