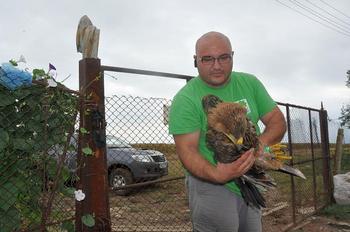 18.08.2014
Sunday. The unusually rainy August day was one of the typical of the season busy days for the team of Green Balkans. Almost at dawn, Green Balkans’ Wildlife Rescue Center received a call from the veterinarian of a village near Yambol, saying that stockbreeders had found an exhausted Imperial Eagle (Aquila heliaca). The information was immediately sent to our colleagues working in the field at that time.

This, however, was not so surprising to the field team. The GPS transmitter put on the back of the eagle earlier this year had already sent information alarming a serious problem.

For several days, the transmitter of Malcho (Toddler) as we already called the eagle, had sent signals indicating that the bird was not moving actively. The last 11 positions fixed by the device were sent from the same place, and the location, identified on Saturday night, was a house on the outskirts of the village.

Considering these data, by the time the signal was sent to the Rescue Center, the team had already organized a trip to the area.

Thanks to that, we were able to respond promptly and arrived quickly. The short, preliminary examination revealed that the eagle was very weak and there were open wounds on the body and the wing. They were probably caused by a predator, since once on the ground, the eaglet had become an easy prey.

That very day Malcho was transported to Green Balkans’ Wildlife Rescue Center, where the specialists took care of it. A closer examination at the clinic showed that the feathery patient was in critical condition and had lost about a third of the normal weight for birds at this age.
The veterinarians of the Rescue Center appointed immediately an adequate therapy to the new patient, while its wounds were carefully cleaned and treated. Then the eaglet was placed in the Intensive Care Unit.

Unfortunately, the condition of the eagle is not encouraging at all and the team is expecting its recovery with very mixed feelings.

This is the fourth case this year, when, with the assistance of the team of Green Balkans an Imperial Eagle was admitted for treatment at the Rescue Center.

It is one of the two chicks of an Imperial Eagle pair that occupied an artificial nest mounted by Green Balkans to support the rare birds. There is a great difference between the two eaglets in the nest. Logically, the older one fledged first, while the younger and smaller eaglet (Malcho) that was hatched later remained in the nest for a long time.

The data from the GPS transmitter mounted on Malcho showed that it had made its first flight around August 4th. Given the significant age difference between the two eaglets, probably the adults had focused their attention and care on the older chick, since it was more active, ate more, and covered bigger territories.
So, Malcho was left without vital parental care necessary for juvenile birds in their post-fledging period. Because, even though it has fledged, the inexperienced eaglet is still uncertain and needs to be supported by its parents - to learn to hunt, to get to know the area, and to receive readily provided food. Probably, being an orphan, recently the eaglet has not ate enough and got exhausted. Fallen helpless on the ground, it has become an easy prey for predators - feral dogs, jackals or foxes.

Yet, Malcho survived and thanks to local people was saved.
Our team hopes that the juvenile Imperial Eagle will be lucky enough and will recover successfully at Green Balkans’ Wildlife Rescue Center.

Green Balkans’ activities for the conservation of Imperial Eagles and their habitats are implemented with the support of our long-standing partner from Germany - EuroNatur Foundation.