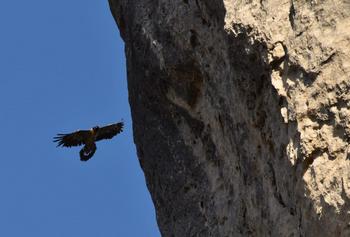 19.11.2021
A few days ago Pablo Izquierdo a colleague of ours announced a wonderful new. During e regular monitoring he has seen and even photographed a Bearded Vulture, hatched in the Wild Rescue Center in 2020.
The story of that bird is very curious. We can rightly say, this bird has a great luck, because our team has rescued it several times.

In the first place Spas, as we called him whilst his being at our place, has hatched with the help of Green Balkans’ team and has been bred in our incubator room for 7 days. He was the second one of the two hatchlings of the pair in 2020. This was a great joy but also a great care for our team,since we had to implement a brand new methodology of breeding  - the two fledglings had  to be separated so as the lesser one not to be injured.
Once this problem was solved and everything went well, days before sending Spas to France in order to be released there, our team found he has a broken leg.

This obstacle although difficult we managed to overcome. Spas left to France a month and a half later.

There they gave him the name Aven! But for us he stays our wonderful Spas – the lucky one to the end.

And here he go, a year and a half later, Spas – Aven flies  free in the vicinity of Les Vignes  -  Grands Causse,  for joy, happiness and special pride of the team of Green Balkans.