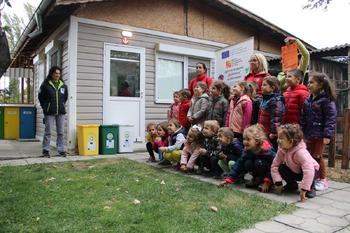 11.10.2021
The children and their teachers were guests of the Green Balkans at the end of last week!
In addition to meeting with the residents of the Wildlife Rescue Center, the young nature lovers had the opportunity to learn details about the BioLearn BSB142 "Environmental Awareness and Behavior to Stop Pollution in Significant Wetlands of the Black Sea Basin" project.

The activities of Green Balkans, part of the project, are focused on Lake Pomorie, as one of the most important wetlands on the Bulgarian coast. It often happens that various wastes dumped intentionally or accidentally in coastal areas not only pollute the environment but also pose a direct threat to wetland biodiversity. Pieces of fishing nets, fishing line and hooks, pieces of ropes, as well as rubber bands that birds confuse with worms thrown uncontrollably into aquatic ecosystems, have injured many of the patients admitted to the Rescue Center for treatment. Among the possible solutions for reducing the amount of these dangerous objects in nature is the environmentally responsible behaviour and of course the separate collection of waste.

This is one of the main objectives of the BioLearn BSB142 "Environmental awareness and behaviour to stop pollution in significant wetlands of the Black Sea Basin" project, funded by the Joint Operational Program for Cross-Border Cooperation "Black Sea Basin 2014-2020". On the implementation of the project NGO "Green Balkans-Stara Zagora" are partners with various government institutions and NGOs from Turkey, Ukraine, Greece and Georgia.

The children were introduced to the importance of nature conservation and separate waste collection.