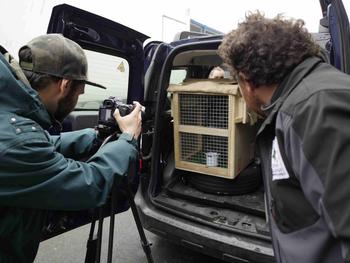 Bulgaria received a precious gift – a black vulture that will become a part of the species reintroduction programme in our country, implemented by Green Balkans.

20.12.2018
Earlier today our team welcomed an important guest – a male cinereous vulture, donated to us by the Dutch zoo Ouwehands Dierenpark.

The bird was donated as part of the species reintroduction programme in our country implemented within the Green Balkans’ Bright Future for the Black Vulture LIFE14 NAT/BG/649 project. The transportation is funded by voluntary donations from foreign and Bulgarian citizens.

The male bird has an important mission! It will become part of a breeding couple at the Green Balkans’ Wildlife Rehabilitation and Breeding Centre in Stara Zagora. This will be the only breeding couple from the species in Bulgaria! We hope the two birds will breed successfully and we will be able to release their offspring within the species’ reintroduction programme.

The other half of the story:
The female bird – Cherna, arrived at the Green Balkans’ Rescue Centre in 2011 and in 2014 was joined by the male De Doue, named after the zoo that donated the bird. Unfortunately the couple could not produce a brood and have never been observed copulating for the four years they spent together. Despite Cherna’s unambiguous mating behavior and the clear way the female demonstrated her feelings for the male bird, they were not matched by De Doue. The male did not show any interest even after prolonged courtship and multiple gestures of affection by the female. One of the possibilities is that an old wing fracture is preventing the male from successful copulation.

One thing is certain, after many observations we are convinced that Cherna is ready to start a family and take care of her own fledglings. This is why we are motivated to give her a new chance. This was the second year in a row Cherna laid eggs – a barren product of her unrequited love.

Finding a black vulture for the breeding programme is a hard job due to the species low numbers in Europe, our team has been negotiating with our colleagues from the European Endangered Species Programme (EEP). Eventually, we were lucky to find an appropriate bird donated to us by our friends at the Ouwehands Dierenpark. We would like to send a special thank you to Marleen Huyghe – the EEP coordinator for the species for the cooperation and help we received!

We needed a 1000 Euro for the transportation of the male vulture that we tried to collect with a charity campaign. We successfully raised 864 Euro and are still looking for the 136 Euro we need to fully cover the transport. https://greenbalkans.org/VulturesBack/bg/135-evro-ni-delyat-ot-edno-novo-nachalo.p616
You can help our couple get together. Donate here:

The Zoo is part of the European Endangered species Programme (EEP), run by the European Association of Zoos and Aquaria (EAZA).