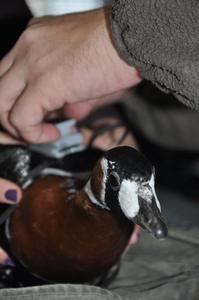 30.06.2015
Brent, the Red-breasted Goose tagged by Green Balkans with a satellite transmitter in February 2015 is dead. The bird died as a result of a collision with a power line in Eastern Kazakhstan, almost 100 days after it was released and travelled more than 3,500 km on its way to the breeding grounds.

The last signals received from this bird were sent from Kelerovka – a small settlement in NE Kazakhstan. From 24.05.2015 till 30.05.2015 the transmitter sent signals from a house in a settlement called Tainsha, then it stopped, probably due to an exhausted battery. This made us think that the bird was probably dead or captured. Therefore, we had to look for assistance from our colleagues in Kazakhstan. Thanks to Nikolay Petkov from BSPB and Nailya Mustaeva from the Regional Environmental Center for Central Asia, we reached Dr. Sergey Sklyarenko from the Centre for Conservation Biology of ACBK (Association for the Conservation of Biodiversity of Kazakhstan). Dr. Sklyarenko contacted Dr. Vladimir Vilkov in Northern Kazakhstan, who finally solved the riddle and helped us assemble Brent’s last days.

Unfortunately, Brent could not overcome the numerous challenges faced during the migration. The whole team was eagerly tracking the bird’s trip, and its successful journey through some of the most risky areas subject to huge poaching pressure gave us hope for a successful outcome… Unfortunately, humans caused Brent’s dead… through the power lines.
This is just another case of bird mortality caused by the power grid, which once again confirms its significance as a negative factor affecting rare bird species.

The Red-breasted Goose was kept illegally in a private home in Kavarna, where its primaries were cut (so that it could not fly). On 19.02.2014 the bird was confiscated and transported to the Rescue Center by a team of BSPB. It could not be released in the winter of 2014 because growing new primaries would take months. Therefore, Brent had to stay at the Wildlife Rescue Center in Stara Zagora. After long months of caretaking, the bird was fully recovered and had new primary feathers. The examinations carried out early in January revealed that it was absolutely fit to be released.

Brent was marked with standard metal rings and tagged with a satellite transmitter. This would enable the team track the migration of this rare species to the distant breeding grounds in the tundra. The transmitter used to send coordinates of the bird once every 8 hours. Thus, a quite precise “map” of its location and migration could be drawn. Also, valuable information about the species, needed for its proper conservation, could be gathered. The observations of the first days showed that the bird had joined the other geese at Lake Durankulak, roosting in the reservoir and feeding in the vicinities of the lake.

The story of the tagged Red-breasted Goose is almost the same as that described in the children’s book, issued by Green Balkans in 2014, where the protagonist is also called Brent. In the book, Brent traveled more than 6,000 km to Bulgaria, facing lots of challenges and difficulties (just like the real Red-breasted Goose). In the children’s book, just like in the real story, Brent was found by conservationists, who took care of him and then released him, so that he could take the long way to his birthplace in Siberia...

Unfortunately, while the story of Brent in the book has a happy ending, that of the real bird had a fatal outcome ;((