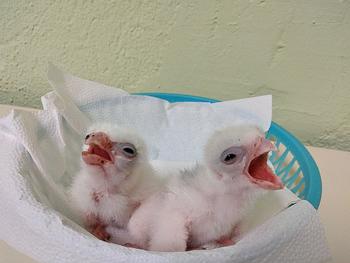 At the Wildlife Rehabilitation and Breeding Centre of Green Balkans there are currently 123 Eggs from 8 different bird species.

27.04.2021
At the Wildlife Rehabilitation and Breeding Centre of Green Balkans, the breeding season is in full swing.

Some of the breeding couples here, like for example the Eastern imperial eagles, are part of projects intended to help the species in the wild. Others, like the vultures and the Lesser kestrels, are part of activities focused on the recovery of extinct species.

However, there are also birds tasked with being foster parents to wild orphans, who have been received at the baby sector of the Centre. Such are the owls, the Common kestrels, and the little owls. Those are birds that had gone through treatment in the infirmary of The Rescue Centre but have permanent injuries which prevent them from living in the wild. Those birds do not only breed here but are also given the task to become foster families to the dozens of hatchlings who every year lose their families in the wild and end up with us.

The season has just begun and here the things are getting intense, but at the same time pretty interesting.

Of course, we will have many other occasions to boast about our new bird families, laid eggs, and hatchlings!