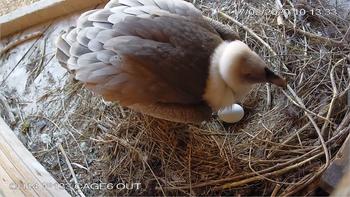 And there it goes! The second Griffon vulture egg!

17.02.2020
The Griffon vultures at the Green Balkans' Wildlife rehabilitation and breeding center laid their second egg for this breeding season!

The second egg appeared 30 days after we took the first one and put it in the incubator. This stimulated the birds to start buildling nest again and after a few days they started copulating. Copulations are often and this gives us the hope that the egg might be fertile!

In the first hours after laying, the female was carefully incubating the egg. On the second day the male took over and now he is more active in incubating, which is pretty normal for him as he has proven himself as a considerate parent of the first and only Griffon vulture hatched in the Rescue center.

Quite soon it will become clear whether the egg is fertile or not – the incubation period terminates after about a week.