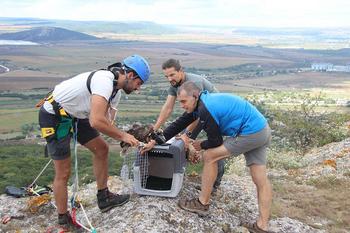 Action to save two juvenile Egyptian vultures from Northern Bulgaria

09.09.2021
As in the previous breeding season, the juveniles of the newly formed pair of Egyptian vultures in northeastern Bulgaria had to be taken for raising at the Wildlife Rescue Center of Green Balkans. Like the previous summer, the juveniles hatched late, at the end of June, and their age will not allow them to leave the nest on time and start their migration. Our long-term monitoring revealed that these late-hatched chicks are usually abandoned by their parents in September, or have much lower chances of survival because they lack time to prepare for the migration. Therefore raising them in captivity will increase their chances for survival.

On September 2nd, a joint team of BSPB, Green Balkans, and representatives of the Prague Zoo used alpine equipment to extract the two birds from the nest. They were healthy and transported to the Green Balkans Wildlife Rescue Center in Stara Zagora, where they have been examined. They will be raised in captivity and kept with other Egyptian Vultures until the spring. Next year, both juveniles will be released by the delayed release method in the Eastern Rhodopes as part of the experimental restocking program of the LIFE project "Egyptian Vulture New LIFE".

Last summer, the new pair raised one juvenile, which also had to be taken due to its age. The late breeding in both years is most likely due to the lack of experience of the young parentsand the disturbance caused in spring by tourists near the nest. The pair is supplementary fed and collaborators of the project observed the juveniles.

We thank RIEW-Varna for the cooperation!