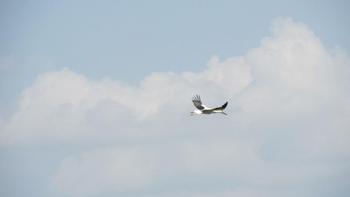 A young White Stork, treated at Wildlife Rescue Centre, was found in Sudan

17.02.2015
A young White Stork, admitted for rearing at the Wildlife Rescue Centre in 2012 from Pazardzhik, was found some days ago in Sudan.

Unfortunately, the bird was found dead. How did we recognize it though?

This was made possible through the ring, fitted on the stork before its release.

Despite its death, this bird helped the scientists, marking the migratory route of its species. The information is valued by not only the experts from the Bulgarian Ornthological Centre (BOC), but also for us, the team of the Wildlife Rescue Centre. On one hand it helps experts assemble the migratory route of these birds, while on the other - it provides feedback on the faith of the birds which have been treated at the Rescue Centre.

This data shows that thanks to our efforts, this particular Stork has survived 896 days following its release, or 2 years and 166 days.
These numbers justify our efforts and the role the Rescue Centre plays in treating and preserving the populations of rare species in Europe.

We are very grateful to our colleagues from BOC for sharing this data with us!