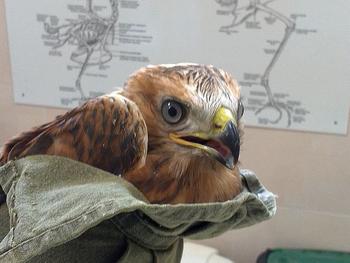 A young Long-legged buzzard was released from an adaptation aviary (hack) near the Rescue Center of Green Balkans.

02.08.2022
A few days ago, a young Long-legged buzzard, raised at the baby sector of the Green Balkans Wildlife Rescue Center, was released into the wild, through a hack.

The use of an adaptation aviary placed in the branches of a tree, in the Center area, prevents the stress of being released from the "arm". The method has been used for many years by our team. The young, still fluffy hatchling is placed in it, and the food is fed to it by means of a mechanism resembling an elevator. In this way, the contact of the young bird with people is limited to a minimum. And when the chick is big enough, the aviary opens and the bird flies out when it's ready.

In the days after the release, our team continues to leave food in the hack, as this is the period when the young bird learns to hunt and feed itself.

Using a hack to release young chicks is a very successful method that allows the birds to adapt to the wild. We, from Green Balkans, have over the years used the method for various species - kestrels, owls, eagles, buzzards...

We wish the buzzard Godspeed!