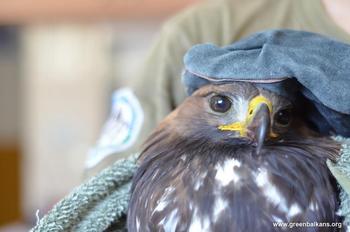 16.09.2014
On September 16th 2014, staff and volunteers of Green Balkans and the Wildlife Rescue Centre, together with colleagues and friends from the Central Balkan NP and Bulgarka NP released a successfully treated Golden Eagle at th e vulture supplementary feeding site above the village of Tuzha.
Before we set the bird free, the team of the Rescue Centre fitted it with a standard ornithological ring and a PVC ring B06, which will help us identify the bird if it get caught again.

Despite the poor weather, we were welcomed by 14 previously released Griffon Vultures, and to our joy, we spotted two wild, non-tagged birds among them, clearly visitors from elsewhere.

The young Golden Eagle confirmed our expectations and flew well. We hope that since the bird had been caught here, it would be familiar with the area and would adapt quickly.

The eaglet was found exactly here, at the aviary, maintained within the Vultures Return in Bulgaria LIFE08 NAT/BG/278 Project. The bird let a profect officer catch it with bare hands and was therfore transported to the Wildlife Rescue Centre.
Fortunately, the examinations revealed no fractures or other obvious injuries and after an overall therapy and warm care, the bird recovered and showed such an apetite and spirit, that the team decided it was time for it to go back to nature.

We hope that the Central Balkan National Park would offer wonderful sites for nesting and a lot of food and if the eaglet finds it hard to adapt in its very first days, it can always keep company to the vultures at their feeding site. :)

We are very grateful to all volunteers and colleagues who came to share this moment with us!

Golden Eagles are among the greatest eagles in Bulgaria. Towards the middle of the last century, the species was driven to the edge of extinction, but nowadays its numbers are stabilizing. The most pairs are found in the Balkan Mountains and the Predbalkan area. These majestic birds often use the food of the vultures and are so aggressive that can actually chase off even those giants among birds. Yet another interesting feature of Golden Eagles is that they feed on tortoises. Despite their huge talons and beaks, they cannot actually break the hard shells, so they catch the tortoises and drop them on rocks.
Golden Eagles are considered as vulnerable and are protected by the Bulgarian Biodiversity Act.