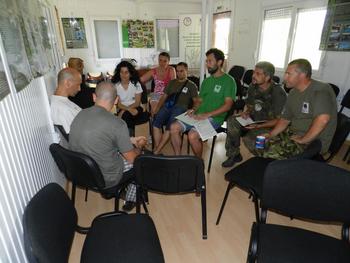 15.08.2014
Dr. Llopis is among the leading experts on Bearded Vultures, actively involved with the restoration of the species in the Alps and the Pyrenees, an author of a series of studies on the food spectrum of Bearded Vultures, experienced in captive breeding and behavior of these majestic birds. At present, Alex is working in one of the specialized centres for breeding of Bearded Vultures in Vallcalent, Spain, as a part of the Vulture Conservation Foundation team.
The Foundation is a formal owner of the Bearded Vultures, included in the breeding programme of the European Association of Zoos and Aquaria. The main aim of the EEP is raising of chicks, which are hacked into the wild for restoring the species where is has gone extinct. Thanks to the long-term efforts of the experts, the Bearded Vultures released by them are currently breeding into the wilderness of the Alps and the Pyrenees. Within the same programme, a pair of young birds was granted to the Wildlife Rescue Centre at Green Balkans in 2007-2008. Bearded Vultures start breeding between their 8th and 12th year in captivity so our team is eagerly following their very first shy attempts.

Because of this pair, as well as the long-term plans of Green Balkans for the return of the species in Bulgaria and thanks to the VCF, Alex managed to visit us and inspect our birds and facilities. He gave us priceless  advice for reconstructions, we will use to optimize the conditions we offer to our birds.

After the visit at the Rescue Centre, we showed Alex several of the sites Green Balkans works at, as well as the sites we consider potential for the future release of Bearded Vultures. For the few days of his stay, we managed to visit the Eastern Balkan Mountains, Sakar, the Eastern and Western Rhodopes and Central Balkan.

Alex generally approved the sites we have selected and confirmed that the long-term strategy for the restoration of Bearded Vultures also comprises the Balkans.

We are very grateful to Alex, as well as to the Foundation for this excellent opportunity and we continue to count on our fruitful cooperation!