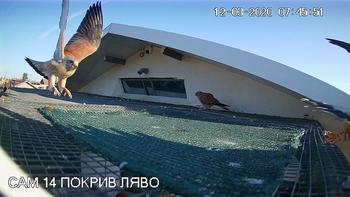 13.03.2020
Over the last few days, the Green Balkans team counted more than 20 Lesser Kestrels flying over the village of Levka, Svilengrad.
This is the largest number of migratory birds of this rare species, to date, since the start of the 'Lesser Kestrel Recovery - Greater chance for the Lesser Kestrel (Falco naumanni) in Bulgaria' project in 2012. All the birds observed so far have been marked with rings, proving that they originate from the colony formed during the project.
And this year, the first to return was a male bird, observed by the Green Balkans team on the 25th of February.
We recall that thanks to the efforts of our team, this extinct species has been restored to the Sakar area.
We hope that the number of those migrating birds returning will increase, and with that, the successfully formed pairs and raised hatchlings, too.
We will continue to inform you of all that is happening around the Lesser Kestrels.