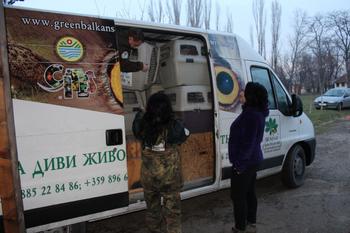 22.01.2018
At the end of 2017, the Wildlife Rescue Centre admitted 28 new Griffon Vultures. The birds will be used in the process of restoration of the much rarer Black Vulture, as their release into the wild and their presence at the supplementary feeding sites attracts and holds Black Vultures.

A total of 22 of the birds were shipped from the specialized centre of our Spanish partners AMUS, where these birds have been treated, rehabilitated or reared after having problems into the wild. Other 4 birds were donated by Zoo Zlin, Czech Republic, where they have been bred by local birds kept in captivity. Together with them, since 2009 Zoo Zlin has donated the project for restoration of vultures in Bulgaria a total of 9 Griffons.

Last from that batch of vultures was K9C, a Griffon, caught emaciated near the Hungarian city of Pecs in October 2017. The bird was successfully treated and fully restored at Budapest Zoo and after consulting our team, it was decided that it was best for it to return and be re-released in Bulgaria, where it is familiar with the areas and the existing supplementary feeding sites.

In addition to that, an extra young bird was donated by the Dierenrijk Zoo, Netherlands, and this is the second bird this zoo is sending us.

We are very grateful to all our colleagues for their kind trust and support!

After a period of adaptation, the birds will be released at the release sites for Black Vultures within the Bright Future for Black Vulture LIFE14 NAT/BG/649 Project. The first batch of the rare birds is expected towards the end of February, or the beginning of March. Some 50 Black Vultures will be shipped within the 6-year-long project, to start the restoration of this magnificent and useful bird in Bulgaria. We would like to remind you that vultures play key role in the ecosystems as health-officers of wildlife. They are extremely beneficial for people as a natural alternative of incinerators and the costs /both monetary and carbon emissions/ for rendering harmless the carcasses of wild and domestic animals.

Stay tuned for more information on the restoration of Black Vulture and our efforts within the Vultures Back to LIFE14 NAT/BG/649 Project.