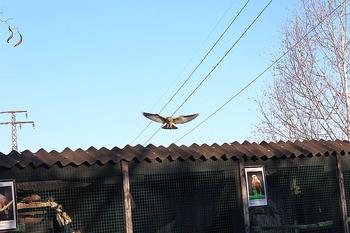 26.04.2021
This spring, the team of the 'Life for Lesser Kestrel' LIFE19 NAT/BG/001017 project listed between 4 and 5 'wild' pairs of Lesser Kestrels in the sky near the Green Balkans Wildlife Rescue Centre!

'This number proves the existence of a stable colony, something we can be proud of for the first year, after two years in a row of releasing Lesser Kestrels in the area!'

Those of the birds that we were able to identify, thanks to the ring with which they were marked, were hatched in the aviaries of the Centre and released in 2020 and 2019!

This is the third proven colony of Lesser Kestrels since the beginning of the work of Green Balkans on the return of the species in our country, which began about eight years ago and the first, discovered within the 'Life for Lesser Kestrel' LIFE19 NAT/BG/001017 project. The other two colonies, known in Bulgaria from before, are at the village of Levka, part of a protected area of ​​NATURA 2000 'Sakar' and 'Lukoil Neftochim Burgas' AD!

For the newly-formed pairs, our team maintains and repairs the existing nesting platforms at the Rescue Centre, and we hope that they will become the home of future bird families!

The discovery of a new colony of the species in our country is a significant event, proving the effectiveness of our efforts to work on the species! Thus, in the Rescue Centre, in addition to those kept at, there are rare species already breeding in their natural environment! The Green Balkans team will continue to observe the sky over the Rescue Centre and the surrounding area in search of new pairs of kestrels!