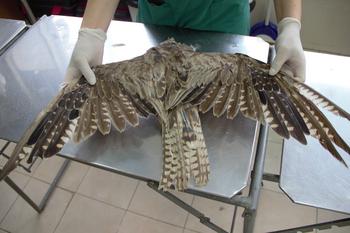 A dead Saker Falcon, released as part of ‘Saker Falcon Reintroduction in Bulgaria’ Project, was found in Sofia.

An employee of the Institute of Biodiversity and Ecosystem Research was contacted first. And thanks to the Regional Inspection of the Environment and Waters in Sofia, after a three day delay, the bird arrived in Green Balkans’ Wildlife Rehabilitation and Breeding Centre.

After it was delivered, the veterinary specialists in the Centre did an autopsy on the bird. In the mouth cavity of the bird was found blood, there were massive bruising of the airbags, lesions on the left white lung, and there was a haemorrhage in the abdominal cavity. Of course, samples were put aside from the contents of the stomach for a toxicological analysis to be made.

The team of the Centre contacted the specialists from the National Institute for Veterinary Medicine Diagnostic and Research of the Bulgarian Agency for Food Safety, where the samples will be send to by the end of the day. If the toxicological test turns out positive, the responsible institutions would be notified.