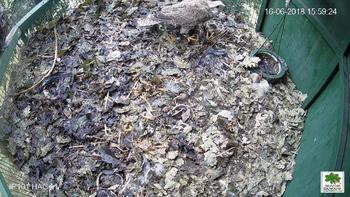 A Saker Falcon, released in 2016, is visiting one of the adaptation aviaries, part of the ‘Saker Falcon Reintroduction in Bulgaria’ project

21.06.2018
For a few days now, the bird is visiting the adaptation aviary (hack) in the outskirts of Stara Zagora, made as part of the ‘Saker Falcon Reintroduction in Bulgaria’ project.

The hack, until recently a home for three young falcons hatched in Green Balkans’ Wildlife Rehabilitation and Breeding Centre, is a place where there’s always fresh food, brought daily by the team of the project.

This exactly has attracted the two-year-old Saker Falcon, a guest to the same hack he was released from in 2016. The bird was hatched in Záchranná stanice pro zraněné živočichy na Huslíku and transported to Bulgaria by the Green Balkans team for the aims of the project.

Interestingly, the same bird, marked with ring 1K, was spotted in the area of Stara Zagora during the winter of 2017.
For this year, this is the second spotted falcon released as part of the project, after another, hatched and released in 2017, unfortunately was found dead in Sofia.

We’re reminding that one of the main advantages of the hacking method is for the birds to get to know the area, to see it as their home, and return there when they’re ready to make their own families. If this is the young bird’s intention – we will know next year!

The Saker Falcons are a species which haven’t been nesting in Bulgaria for decades. But we are convinced our many years of hard work will give results, and after the Lesser Kestrel, they will be the next species Green Balkans will reintroduce in Bulgaria!

The ‘Saker Falcon Reintroduction in Bulgaria’ Project is possible thanks to the financial assistance of Armeec Insurance JSC.