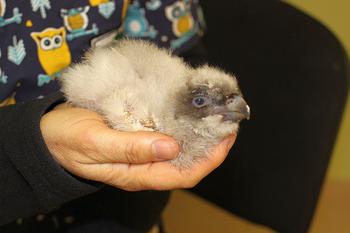 23.02.2018
Yesterday, the first chick for the year hatched at the Wildlife Rescue Centre, assisted by our team, and it is not a random bird but a Bearded Vulture!

A day earlier through the web-camera installed in the nest of the birds at the Centre, we spotted a small hole in the egg. 24 hours later the hole did not get bigger. This was a clear sign for us that something was not quite right.
Following the advice of our colleague and friend Alex Llopis of VCF and the despite the risk of being attacked by the vigilant parents, the team entered the nest and pulled the egg. After that, again under the surveillance of Alex, we assisted the chick to come out of its shell. It turned out that its position in the egg was such that it had a very slim chance of managing on its own.

We then brushed the baby and weighted it and then left it rest through the night in the brooders of the Rescue Centre.
Early the next day, we weighted the chick once again and fed it the first gram of food. Fortunately the chick is not only well, but strong and healthy and eagerly ate its very first pieces of meat.

In the meantime the second egg of the pair is left with the parents inside the nest. It should hatch not earlier than eight days later. Then, if everything is alright, it will be its turn to visit the brooder room, while the older, grown chick will be returned to the parents.

This is the third clutch and the forth chick of the pair, which raised a single chick last year, once again assisted by the team of the Rescue Centre consulted by Alex Llopis, while in 2016, with their very first clutch, the pair managed to hatch two chicks, both of which survived.

Our Bearded Vultures are a part of the Bearded Vulture Endangered Species Programme (EEP) of the European Association of Zoos and Aquaria (EAZA), coordinated by the Vulture Conservation Foundation (VCF).