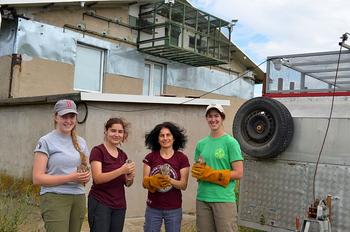 13.07.2021
Last week, 10 young Common kestrels, hatched at the Green Balkans Rescue Centre, were released in the Lesser Kestrels colony in the Sakar village of Levka.

Their release was as the 'Life for Lesser Kestrel' LIFE19 NAT/BG/001017 project team suggestion.

The Common kestrels are close relatives of the Lesser kestrels but are stronger and more combative than them. Their presence will contribute to the more serious defense of the colony, periodically attacked by large birds of prey - hawks, falcons, but also by the small at first glance and so cute little owls!

Currently, the young kestrels live in an adaptation aviary set up in the area of ​​the Centre for Nature Conservation Activities in Levka, but they will be released soon. We hope they will stay in the area, for which we have prepared a rich daily menu.